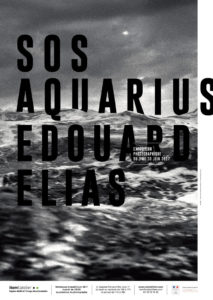 Exhibition from 03 to 30 June 2017
Opening on Thursday 8 June from 6.30 pm in the presence of the photographer
ITEM workshop
3, impasse Fernand Rey
69001 LYON (France)
Monday to Friday from 10 am to 5 pm
Saturday from 2 pm to 6 pm
The ITEM workshop hosts an exhibition on the rescue of several migrants adrift in the Mediterranean Sea, images produced by photographer Edouard Elias. An immersive testimony on the rescue boat Aquarius, front zone where the feeling of relief often mingles with the death and suffering of these refugees.
These prints are exhibited in the framework of the 1st edition of the “Preview” photography festival, which will take place from 3 to 30 June in Lyon.
Migration routes to Europe closing one after the other.
Barriers of Spanish enclaves in Moroccan land. Agreement between Europe and Turkey. Border closures of the neighboring countries of Greece. Barbed wire in Hungary, Macedonia, Bulgaria. Only one road remains “open”: the most dangerous, the longest, the one in the central Mediterranean, known as the Canal of Sicily. The migrants embark on beaches of Libya, sometimes of Egypt, hoping to join Italy. According to the International Organization for Migration (IOM), at least 2,865 people drowned between 1 and 15 September of this year. Others, doubtless, swallowed by the Mediterranean, will remain forever unknown. 129,126 people were rescued and landed in Italy.
The smugglers got organized. Almost more of these large wooden boats, scrap trawlers. Now they are white 10 meters long inflatable boats, made in China, infinitely more fragile, with a soft, artistically rigid bottom made of large screwed boards. They do not float well, bending under the number of passengers – 120, 130 -, breaking in the middle. They leave without water and without food with a few petrol cans and often a mobile phone to call for rescue.
The photos and testimonies presented were taken and collected aboard the Aquarius, chartered by SOS Méditerranée in March and April 2016.